Quote of the Day

"Surely this will be nothing more than very, very irritating for people who want to use the internet?"
Posted by Jake of All Trades at 10:57 AM No comments:

Email ThisBlogThis!Share to TwitterShare to FacebookShare to Pinterest
Labels: Web

(via The Daily WTF)
Posted by Jake of All Trades at 7:58 PM No comments:

Email ThisBlogThis!Share to TwitterShare to FacebookShare to Pinterest
Labels: Usability

Visions of future technology don't involve being chained to a desktop machine. People move from home computers to work computers to mobile devices; public kiosks pop up in libraries, schools and hotels; and people increasingly store everything from e-mail to spreadsheets on the Web.

But for the roughly 10 million people in the United States who are blind or visually impaired, using a computer has, so far, required special screen-reading software typically installed only on their own machines.

New software, called WebAnywhere, launched today lets blind and visually impaired people surf the Web on the go. The tool developed at the University of Washington turns screen-reading into an Internet service that reads aloud Web text on any computer with speakers or headphone connections.

"This is for situations where someone who's blind can't use their own computer but still wants access to the Internet. At a museum, at a library, at a public kiosk, at a friend's house, at the airport," said Richard Ladner, a UW professor of computer science and engineering. The free program and both audio and video demonstrations are at http://webanywhere.cs.washington.edu.

Email ThisBlogThis!Share to TwitterShare to FacebookShare to Pinterest
Labels: iNetNostalgia

I never knew about a lot of these. Some pretty cool stuff, though they aren't Gino's famous Surfboard Etch-A-Sketch or the classic "BoRyan and the Magic Sword" Site Search easter egg.

I'm actually wondering why I never tried entering the Konami code on a webpage, since I secretly do it on most DVDs...

And still nobody has found either of the two Timely Persuasion easter eggs, hint hint.
Posted by Jake of All Trades at 5:46 PM No comments:

It's also easy to imagine how sarcasm might be selected over time as evolutionarily crucial. Imagine two ancient humans running across the savannah with a hungry lion in pursuit. One guy says to the other, "Are we having fun yet?" and the other just looks blank and stops to figure out what in the world his pal meant by that remark. End of friendship, end of one guy's contribution to the future of the human gene pool.

Email ThisBlogThis!Share to TwitterShare to FacebookShare to Pinterest
Labels: Science

The Dash Express GPS has an open API. Since they opened it up a few weeks ago, several applications have come out, mostly weather and speed trap reporting. The social micro-blogging service Twitter has now been added. When you activate the application is sends out a tweet that marks your location. I think this is just a little taste of what's to come with new GPS enabled iPhone.

Posted by derteufel at 3:09 PM No comments:

Checking In Outside The Box

Hustle & Flow
Alaska Airlines' Airport of the Future makes quick work of getting passengers through check-in.

The results? During my two hours of observation in Seattle, an Alaska agent processed 46 passengers, while her counterpart at United managed just 22. United's agents lose precious time hauling bags and walking the length of the ticket counter to reach customers. Alaska agents stand at a station with belts on each side, assisting one passenger while a second traveler places luggage on the free belt. With just a slight turn, the agent can assist the next customer. "We considered having three belts," White says. "But then the agent has to take a step. That's wasted time."

Alaska, then, is likely to save almost $8 million a year on the Seattle terminal if it converts customers the way it has in Anchorage. The Seattle makeover cost $28 million, a far cry from a new $500 million terminal.

In the spirit of Anti-Valentines (and to a certain degree, Married To The Sea), check out some father's day cards from someecards.com 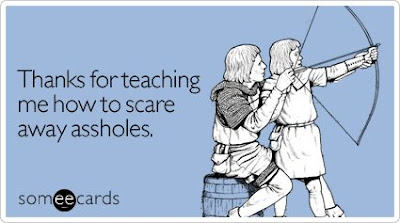 (indirectly discovered via CupKozy)
Posted by Jake of All Trades at 12:45 PM No comments:

Email ThisBlogThis!Share to TwitterShare to FacebookShare to Pinterest
Labels: Web

Interesting behind the scenes interview, via Webware

"I don't have to tell anybody around here that search is important. That's a very nice luxury to have,"

Posted by Jake of All Trades at 4:40 PM No comments: