Bringing the old TOWFORM blog back from the dead for something a little different...

As a big music fan who also enjoys books, a novel based on an album is an intriguing concept to me. Books regularly get adapted for movies and TV. Musician's back-catalogues get Broadway adaptations. In somewhat rarer cases movies get a tie-in novel and/or adaptation. But music done in book form isn't something I'd heard of before.

When the novel in question is based on my favorite record of all time, you had me at hello. 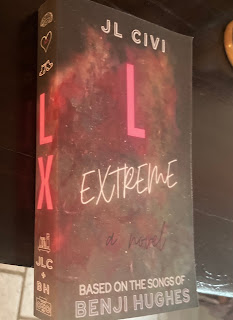 L Extreme by JL Civi is (almost) a song for song adaptation of the album A Love Extreme by Benji Hughes, an artist once called "the best songwriter you've never heard of" by Vulture.com. The record is an epic, cross-genre extravaganza mixing beats with ballads in a package best described as goofy yet sincere. Wry lyrical observations, rockers with silly wordplay, love songs that really really nail you and a handful of instrumentals add up to something greater than the sum of its parts.

How the heck do you make a coherent novel out of this? Depends on your definition of coherent...

Civi takes the blueprint provided by the record to the extreme, dividing the book into 4 parts mirroring the 4 sides of the double vinyl release. (Characters cheekily reference "flipping the record" leading into each side in a way that's not exactly meta but not exactly not.) The result is a non-linear narrative that loops back on itself in a series of dreams, flashbacks and do-overs making the meandering plot hard to follow in the early going until it starts to click together in the second half. Reminds me of the way the tv show LOST would slowly unfurl character backstories with flashbacks that were mostly standalone but also somewhat connected if you paid close attention.

After a trippy, dreamy opening (that ends with the curiously un-dreamy line "and then I fell asleep"), Side A introduces us to Benji and his roommate C. Benji is estranged from his ex-girlfriend named L (yes, there are 2 characters with single letter names), and C wants to hear the story of how they met to help get them back together. A faithful adaptation of the song "You Stood Me Up" set at a Dairy Queen serves as a McGuffin of a flashback ostensibly kicking off the tale of Benji & L's courtship, but a series of present day events derail a proper origin story and send the roommates down some absurd song-inspired side-quests to decide how loud their jambox stereo is, go undercover on a neighborhood watch mission as trick-or-treaters (not on Halloween) with their mysterious neighbor down the hall that ends with them possibly being chased by a UFO, and ultimately culminates at a Halloween party without invitations (and not on Halloween) Benji can't remember -- which is unfortunate since somebody killed the DJ they hired!

Why can't Benji remember? He had a dream he was Sam Beckett in an amusing tribute/parody of the Quantum Leap episode "The Leap Home" when Sam leaped into himself as a 16 year old. (The tv episode features multiple scenes of Sam running through a cornfield. The song this chapter is based on is an instrumental titled "Cornfields" -- get it? Also, all of the instrumental songs are told as wild, surreal dreams.)

Side B returns to the original "how did Benji & L meet?" question C is so curious about, this time with the song "Where Do Old Lovers Go?" setting up a story of Benji meeting a girl named Jessica in a supermarket who later takes him to a magic show at a funeral. Just when you're getting a feel for the rhythm of the "dream, misadventure, flashback" formula the story takes a massive U-turn with a multi-chapter fantasy infused fairytale featuring Heartman & Songstress, the little woman who lives in Jessica's brain and the little man who lives in her heart.

A reveal I won't spoil here at the end of Side B ties the first two parts together, teeing up more silly song inspired misadventures in the back half that I will minorly spoil to give a flavor for how things almost start to make sense under the circumstances. A previous throwaway reference to the red line on Lloyd Dobler's home stereo in Say Anything sets up Benji holding the aforementioned not-that-loud jambox over his head on L's lawn in an attempt to win her back. That Quantum Leap dream foreshadows AN ENTIRE HIDDEN EPISODE OF QUANTUM LEAP (!!!) in a flashback to the previously unseen Halloween party -- only this time the DJ doesn't die and becomes an important character going forward. By the time the villain from the fairytale (an alien wizard type foe named Evilon from a different Benji Hughes album titled LILILIL) shows up in the "real world" to wreak some havoc you find yourself just rolling with the insanity and rocking out to the soundtrack to find what comes next -- assuming you stuck around this long. I think it's worth it. 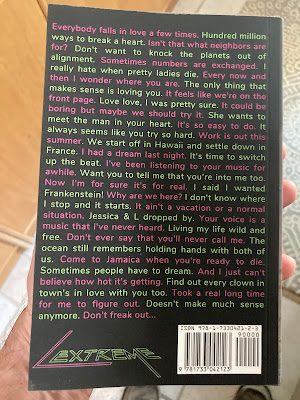 The track by track = chapter by chapter stunt gives a reader familiar with the source material some hints at what's to come and might make you smile at the way the lyrics enter but don't quite influence the plot, but this story is a wild trip in and of itself unlike anything you've ever read before. If David Lynch and Charlie Kaufman collaborated on a musical biopic, it might be in the ballpark of L Extreme.

Call me biased, but I give it 3 stars in general plus a full bonus star for even attempting to turn a wildly awesome record into an equally wild piece of fan fiction with a satisfying ending for a 4-star total rating.

Jake of All Trades & JL Civi share a brain but are not the same person. Opinions expressed above are from the fan side of the equation only, though there's always risk of some bleedover in these situations.

Posted by Jake of All Trades at 1:18 PM No comments:


“I wasn’t prepared for it,” Emswiler said. “I just think it’s miserable when the sun sets at 4 o’clock. . .  On a cloudy day, it starts getting dark at 3:50-something.”
He eventually penned a column for The Boston Globe in 2014, listing some of the potential benefits of extending Atlantic Standard Time, one hour ahead of Eastern Standard Time, through the fall and winter. After all, he argues, we’re already essentially in that time zone for most of the year, through daylight saving time.

Posted by Jake of All Trades at 2:17 PM No comments:


One More Weird Thing...
Some places play with time for their own reasons. A resort in Madagascar called Anjajavy wanted the sun to rise later and set earlier, so they created their own time zone — an hour ahead of the rest of Madagascar — for a later sunset hour. Visitors have to change their watches to Anjajavy time. Says the hotel's website: "A time peculiar to Anjajavy the lodge was created so that we are better adjusted to the natural cycles of the reserve and the village. Therefore, at 5 pm lemurs naturally join us in the Oasis garden to take advantage the foliage. It is fresh hour, right in time for the "5 O'clock tea."


via NPR
Posted by Jake of All Trades at 2:10 PM No comments:

We all know how I feel about Daylight Saving Time.

This guy feels it too:

Often I see folks use an EST or an MST during Daylight Savings Time.  It never feels appropriate to explain this to them at the time.  So, I’m hoping by explaining it to everyone here that no one ends up feeling singled out or criticized.


Difference is I always feel the need to call people out on it for the betterment of society.
Posted by Jake of All Trades at 7:41 PM 2 comments:

(And I really hope double daylight never comes to pass.) 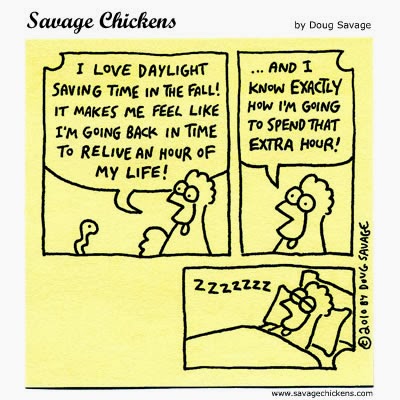 Posted by Jake of All Trades at 6:00 PM No comments:

This gets my vote!


Yes, we can turn back time. There's a way to end seasonal clock confusion and eliminate jet lag. All it would take is doing away with daylight saving and splitting the continental United States in two time zones: East and West, an hour apart.


The original article CNN references gets even juicier...


It would seem to be more efficient to do away with the practice altogether. The actual energy savings are minimal, if they exist at all. Frequent and uncoordinated time changes cause confusion, undermining economic efficiency. There’s evidence that regularly changing sleep cycles, associated with daylight saving, lowers productivity and increases heart attacks. Being out of sync with European time changes was projected to cost the airline industry $147 million a year in travel disruptions.